It’s not often that a South African-born and based sound engineer gets to record and mix for Grammy Award-winning band Mumford and Sons. Here, our CEO Christi van der Colff shares a bit about her experience recording & mixing Mumford and Sons: Dust and Thunder- Live from South Africa for Dolby Atmos.

Meeting Mumford & Sons and having the right connections

In 2009, I had the privilege of working with Ryan Tedder of One Republic. While on a tour in South Africa, they visited our studios, MasterMax, now home to Abbey Road Institute Johannesburg. Ryan picked up one of the West African drums and started laying down a beat and guitar part that I recorded. This became the signature sound of the song, Everybody Loves Me.

This encounter later led to One Republic recommending me to the producers at Eagle Rock Entertainment, based in London. They were responsible for filming the upcoming Mumford and Sons concert in South Africa. The potential opportunity to record them was a dream come true.

The original plan was for the concert to be mixed abroad in Dolby Atmos. I was already established as a live concert recording engineer and just started building the first Dolby Atmos mixing stage in Africa. Understanding what the deliverables are helped me land the recording deal, we agreed that I would do the multitrack recording and then hand over the recorded media to the producers. 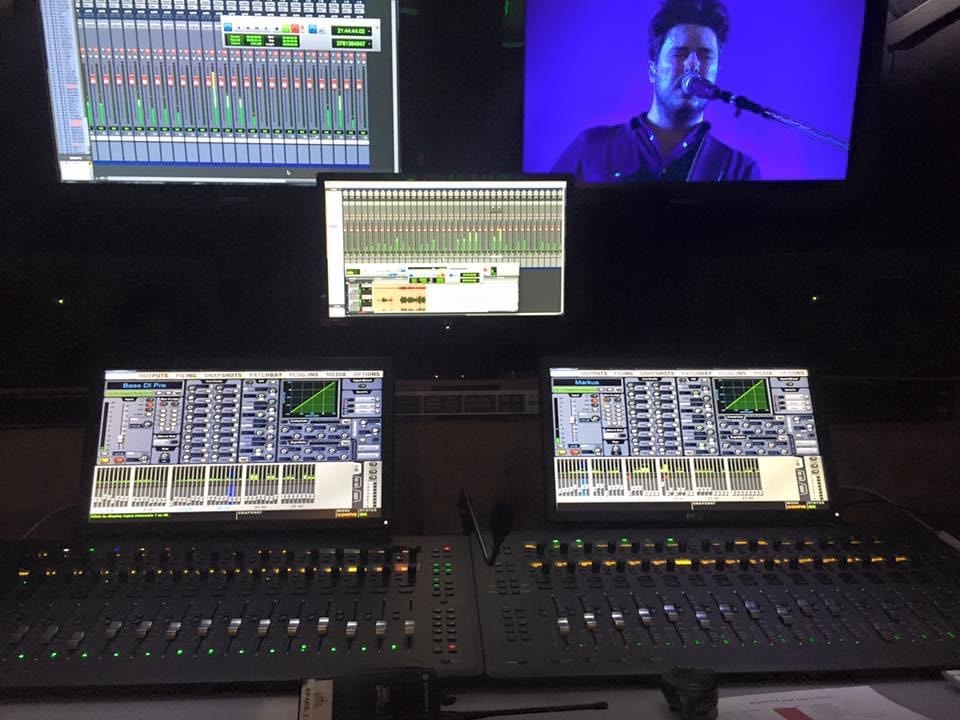 During the concert, we ran a dual-synched Avid S3Lx system with 4 x E3 engines – 2 for recording and 2 as backups, therefore, recording a total of around 128 audio sources. These included a complete multitrack of all audio sources from the stage, plus the 36 audience sources. As an additional backup, we recorded all the band sources and some audience microphones on a separate Sadie H128 recorder using a MADI feed from the monitor console.

We needed to send a mix to the director, who was doing the live-cut Multicam vision mix. I rendered a listening mix from our mobile location recording studio. On the morning of the second concert, in preparation for that evening’s show, we replayed the previous concert listening mix to check that everything was recorded as intended. While listening to the recording, one of Mumford and Sons’ band members asked over the comms what music we were playing. I confirmed it was the previous evening’s listening mix. He said, “Thank you. It’s sounding great!” That evening, we recorded the second show. It was utterly magical. After the concert, we handed over the recorded media to the producers, as agreed.

Mixing ONE Song to THE entire concert

A few days after the concert, I received a call from the producer asking if I would mix one song for them. After hearing the mix playing over the comms the band was interested to see what I could do. I jumped at the opportunity. That was how I came to mix the song: Believe.

The next call I received from the producers made one of my biggest dreams a reality. They wanted me to mix the full concert, which was to be released as a musical concert film in cinemas, as DVD and as a live audio cd. It was a tremendous opportunity to mix this incredible concert for one of my all-time favourite bands. My studio was equipped to work in both Dolby Atmos and Auro3D. And so, the Mumford and Sons – Live From South Africa: Dust and Thunder project became the first musical concert film in history released in cinemas and Blueray in both Dolby Atmos and Auro3D immersive formats. 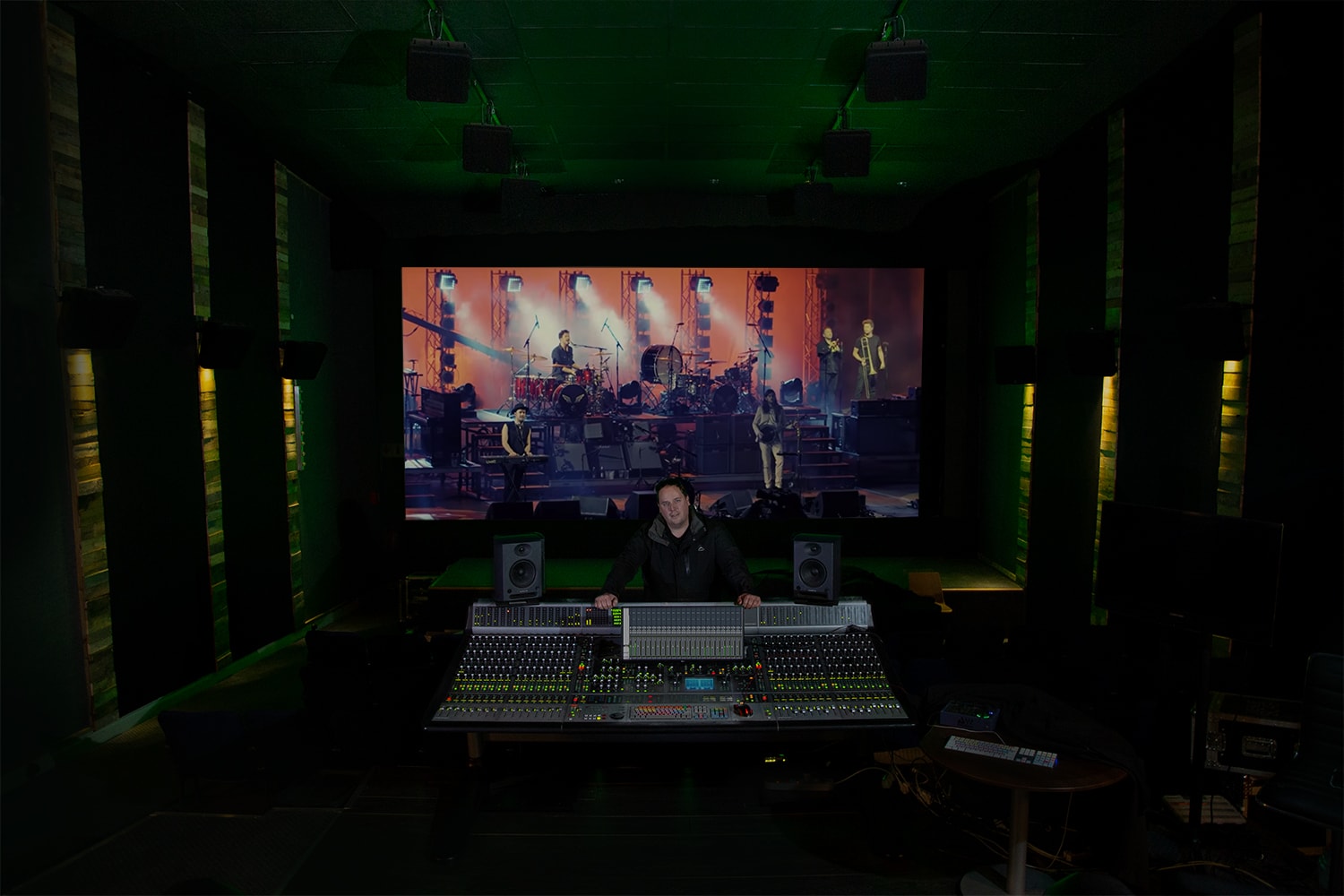 With this project, I wanted to create a musical artwork; to not just be heard, but felt and seen. My philosophy is that the mix should never detract from the message of the music. It should create an environment in which the music’s message can come to life.

I came up with a unique audience recording approach that allowed us to truly capture the experience: attaching omnidirectional radio lapel mics on crew members scattered amongst the audience to capture close-up audience reactions in a way that the traditional audience recording techniques did not offer. We also recorded the microphones that were attached to the cameras. It allowed me to cut to the relevant mic when a specific camera was used on a crowd shot. In addition, 12 strategically arranged shotgun audience mics were placed on stage and aimed towards the audience to create a 9.0 audience bed for the immersive mix.

I used the Low-Frequency Effects Channel (LFE) in the same way one would in a feature film mix. Therefore Sub-channels were employed for low-frequency effects rather than a general, low-frequency extension for the music. Using the LFE channel in this way meant that I could create low-frequency breathing space throughout the concert. I used it to evoke emotion on certain songs where I could assign some low-frequency content to the sub. 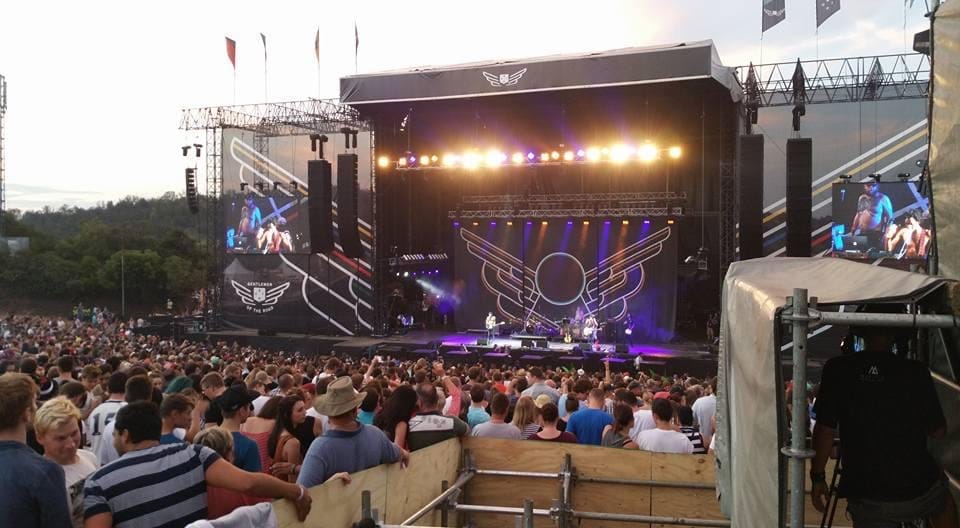 The musical concert film was extremely well received and the reviews of the visual and audio experience have been phenomenal. The vision of both the director, Dick Carruthers, myself and the band – from an audio perspective – was to create timeless art that pays tribute to the beauty captured during the concerts in South Africa. I believe that we achieved what we had set out to do. In the blu-ray reviews at the time, the audio mix received a 5-star rating.

For another reviewer, the live version won him over. He wrote: “ There Will Be Time is more than a standout track of 2016 — it’s all that I am, it’s all that I have it’s one of those really special moments when music becomes infinitely bigger than itself.” Read the article here.

I want to encourage engineers and producers. The quality of your relationships is as important as your technical capabilities. Since working with the band in 2016, I have mixed most of Mumford and Sons’ live performance videos. It has been, and remains, a huge privilege.

The author, Christi van Der Colff, recorded under her – originally – male name, Johan van der Colff. “I am a woman who was born transgender and was perceived as being male. This, however, did not reflect who I am. It took me a long time to fully understand who I am in a world and time that had little to no visibility for people like me. I am now living life the way I was always meant to,” she says. This means that to find the recording credits, readers can Google her work as attributed to Johan van der Colff.